I am fully aware that even on a fairly bog-standard day, I’m a fairly enthusiastic person who’s prone to random outbursts of excitable squealing and clapping, but even I am finding it hard to articulate JUST how excited I was to discover ‘Octavia’s Bookshop’ in Cirencester this week!

As I’ve mentioned in previous posts, I have been desperate to find a lovely children’s independent bookshop (a little like ‘The Shop Around The Corner’ in ‘You’ve Got Mail’)  and I’m exceedingly happy to report that I’ve found it!  Somewhere that’s snuggly and welcoming, with squidgey cushions, easily browse-able bookshelves and preferably some old-fashioned sweeties thrown in as well.

Just look at this gorgeous bench, covered in squishy cushions that are perfect for curling up with a book (and M did just that, reading H’s chosen book with him whilst I did just a leeeeeeetle bit more browsing!).

In addition, obviously, I’ve been seeking a friendly and well-informed owner for said shop – someone who adores children’s books as much as I do and has crammed their shop to the rafters with them.  Let your eyes feast upon this custom-built bookcase that’s tucked in towards the back of Octavia’s shop… 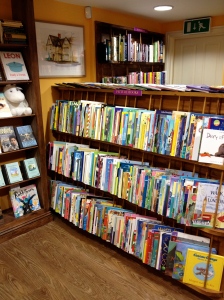 To back up just a little bit, I should mention that I’ve been away in the Cotswolds this week with my three boys (one husband, two children) and my in-laws and, looking for something to do last Wednesday, we decided to drive to nearby Cirencester.  I seized the opportunity to continue my quest for the perfect bookshop and hopefully googled ‘children’s bookshops in Cirencester’ as we parked the car.  I practically hyperventilated when I realised that not only was there an independent children’s bookshop in the town, but that it was mere leaps and bounds from where I was standing (because clearly I was going to have to leap and bound there rather than walk sensibly).

Dragging the family past all the many other beautiful shops in Cirencester (note to readers: it’s well worth a visit if you’re ever in the area), we skipped down to 24 Black Jack Street and tumbled over the threshold of ‘Octavia’s Bookshop’.

We were instantly greeted by Octavia herself, who was very welcoming and polite but kindly left us alone initially to browse.  C and H were thrilled by their surroundings and whizzed around like spinning tops, utterly delighted.  C immediately selected ‘Right on Time Rescues’ – a Thomas the Tank Engine book.  He’s not into Thomas at all, but this book came with TOOLS.  THREE of them.  And there were pictures of HOOKS in it.  Game over.

H chose Usborne’s ‘Noisy Tractor’, as his vehicular preferences lean more towards farm machinery.  M wholeheartedly supported this choice, as he’s recently discovered many old Usborne books amongst his loft treasures which have reminded him of his soft spot for Stephen Cartwright’s lovely illustrations.

I was like a child at Christmas and just didn’t know where to look first.  Octavia’s beautifully curated range of books was basically my own personal wish list come to life.  Everywhere I looked was another gem that I’d been craving for ages, shining out at me.  Goodness only knows how much I’d have spent if I hadn’t been reigned in by the subtle glances from my husband (“Do you honestly need another book???”) and the limitations of what I could feasibly carry.  I eventually selected ‘A First Book of Nature’, by Nicola Davies and illustrated by Mark Hearld, so that I could include it in my newly installed seasonal book box back at home (once I’d drooled over it myself, natch).

Frankly, the book is so delicious that it deserves a post all of its own, so I’ll say no more about it here.

Octavia was absolutely lovely with C and H while I was browsing, even running C’s book through the till a while before I was ready to pay, just so that C could start playing with it properly.  She gave both boys a marshmallow as we left (if she could have done anything else to ensure hero status in their eyes, this was it) and complimented M and I on their manners.  As any parent knows, this equals instant and numerous brownie points, but for me it also meant a bit more.  Having felt awful about the bookseller’s perception of my boys’ level of activity in the other independent bookshop I visited a few months ago (which admittedly was an adult’s shop with only a small children’s section, as opposed to being specifically for children), it was heartening to realise that I wasn’t actually an awful parent and that the boys were behaving quite reasonably for their ages.

I made two more visits to ‘Octavia’s Bookshop’ during our stay (and regretted not making a third, as I now have serious withdrawal issues and a yearning for a gorgeous anthology of fairy tales that was on display) and bought this for myself (as it included ‘Peter Pan in Kensington Gardens’ too, though I also have my eye on the annotated centennial version by Maria Tatar as well) and another Usborne book on telling the time for C.

During the time I spent in the shop, Octavia’s interactions with all her customers were friendly and extremely well-informed, without being in any way heavy-handed.  She’s obviously realised that this would be unnecessary anyway, as everyone seemed keen to take her advice on purchases and the shop was very busy pretty much every time we went in (so much so that on Saturday, when I’d planned to take some more of my own photos for this post, it was too packed for me to get any good shots without a level of gymnastic flexibility that unfortunately eludes me).

The bookshop also runs events such as books signings, story times (for younger children) and book clubs (for slightly older ones) and I overheard Octavia telling a customer that these were so popular that they were already booked up well into 2013.  Purely selfishly, this gave me a warm feeling inside thinking that my Storyseekers idea might also just be as popular one day.

It was so wonderful to realise that this bookshop exists and is successful (see this page on Octavia’s website for everything she’s accomplished since opening in March 2011) and I’m already wondering when I’ll be able to visit again, as my only complaint about the shop is that it’s an hour and half away from where I live.  Gwen Millward is signing copies of her book ‘Bear and Bird’ there on Saturday 17th November and as that’s the day after my birthday, I’m thinking of suggesting to the boys that we make a trip there as a special treat (hopefully along with some birthday spends as well, fingers crossed…).

Thank you, Octavia, for unwittingly bringing my dreams of how a children’s bookshop should look to life.  We’ll be back!

← Loft treasure no.5 – A book for all seasons
‘A First Book of Nature’ by Nicola Davies, illustrated by Mark Hearld →