We’re very excited to be part of the ‘Reading Rocks’ blog tour, celebrating some of the best summer reads from Little Tiger.  We’re even more thrilled that we get to champion this book, which is the debut of author-illustrator, Maxine Lee.

‘Pi-Rat!’ by Maxine Lee tells the story of one scurvylicious scamp as he navigates the high seas. 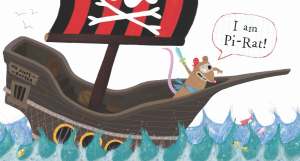 Pi-Rat is a frightening foe, causing all those to encounter him to quiver in their boots.   The boys were particularly afraid when they read that Pi-Rat might eat their dinner – stealing treasure is apparently something they could cope with, but the idea that they may not have enough food one day was ABSOLUTELY TERRIFYING.

Pi-Rat doesn’t work alone and his fearsome crew are ready and willing to join him in living a pirate’s life on the good (or should that be bad?) ship, ‘The Soapy Dodger’.  There is a clue in that name as to the twist at the end of the tale, and I personally love it when books have those subtle humorous elements included for adults / older readers.

Pi-Rat and his crew are scared of nothing, not crocodiles…

or even sharks.  C and H have a highly developed interest in predatory sea creatures thanks to their love of the Octonauts, so they were especially impressed by Pi-Rat’s bravery in dealing with these ravenous toothsome fish.

Suddenly, however, there is a problem – spotted by Pi-Rat himself through his handy telescope.  This unidentifiable creature sends them into a panic, hurriedly saying their goodbyes and preparing for their last minutes on this mortal coil.

Luckily, Pi-Rat’s cheeky / sheepish expression in the final spread reveals to us that there was, in fact, no monster.  Instead, there was a mumster, who if she is anything like me was probably trying a bit of creative role play as a diversionary tactic to stop her child splashing all the water out of the bath while simultaneously managing to clean precisely NO part of his body 😉

The boys and I really enjoyed this book and we are definitely signed up to the Maxine Lee fan club!  Her quirky, colourful illustrations are perfectly suited to this story and there is a lovely use of pirate language for someone of H’s age (two and a bit) – just enough for him to be excited by the unusual vocabulary.  The pre-school levels of peril worked well too, and we actually ended up having a really interesting discussion about the things that made us feel afraid.  C worries most about mummy and daddy not being there, while it seems that H is most worried about C stealing his toot-toot (train).  Equally valid concerns.
As I mentioned at the start of the post, we were lucky enough to get an interview with Pi-Rat’s creator, the lovely Maxine Lee.  Read on for her super answers to everything that C and H wanted to know…
Have you ever met a real pirate or seen a real rat?
I have met a pirate! They all gathered on Liverpool’s waterfront on Pirate Day last year. They had galleons, canons, treasure, swords, feathery hats and everything! I’ve seen a real rat too – he was in a pet shop and was very cute.
Are rats your favourite animals to draw?
One of my favourites, yes!  The others are squirrels, penguins, badgers, tigers and bunny rabbits!
We like all of the book and found it hard to choose a favourite part.  Do you have a favourite page of your book?
I think my favourite part is the crocodiles. Although, I really loved drawing the beach spread, especially the palm tree!
What do you think is the coolest type of shark?
The coolest shark has to be the Hammerhead. Scary and mysterious! I also think Lenny from Shark Tale is pretty cool.
Is your mummy scary?
Very scary, yes. And very lovely. (Hello, Mum!)
If we could do whatever we liked we would eat lots of cakes and sausages!  What would you do?
I would join you! I’d also wear pyjamas that don’t match.
Were you good at drawing pictures when you were little?
I loved to draw when I was little – I can’t say I was particularly good but I went through loads of crayons, felt-tips and paper. When the paper ran out I moved on to walls, floors and people.
Please could you tell us about the best picture you’ve ever drawn?
The picture I’m most proud of is one I haven’t seen since I was 10 years old. I drew a picture of a young queen’s head side on (like a stamp) and every time I looked at it I felt like a ‘proper’ artist.
What is your favourite colour?
Green. And yellow. And sometimes I like blue. Red too. And turquoise.
Are you making any more books?
I am!  Making up stories is something I love and I’ve just finished the artwork for my second book, ‘Sorry, Dad!’.  Lots of mischief!
We can’t wait for Maxine’s next book and will be training our telescopes on her from now on, keen to see her undoubted leaps from strength to strength!
TTFN
P.S.  Do check out the banner on our homepage for the other stops on this blog tour, as they will show you for certain just how much ‘Reading Rocks’!
Disclaimer: I received my copy of this book from the publisher. I was not asked to write this post, nor was I given any money for doing so, and the review represents my own honest opinion.

← Belle and Boo blog tour bonanza post!
How do I love thee? Let me count the ways! →