‘The Princess and the Peas’, by Caryl Hart, illustrated by Sarah Warburton (plus a bit of waffle about gender specific marketing)

November 30, 2012 · by storyseekersuk · in Books and publishing, Reviews, Reviews of current books · 3 Comments

I recently saw a great review of this book over on one of my very favourite blogs, Child-Led Chaos (you can read it here) and the super-lovely Anne-Marie (of Child-Led Chaos) was kind enough to pass on one of her copies.  It’s been one the most sought-after stories in our house ever since.

There was another reason I was interested in sharing this book with the boys.  Recently, there has been a fair bit of debate among publishers, booksellers and book lovers about the need (or not) to package and market a book according to the gender of the majority of its intended readers.  Nosy Crow, who publish ‘The Princess and the Peas’ wrote a blog post around this subject that sparked a multitude of thought-provoking comments – it’s well worth a read.

To summarise my own feelings on the matter, I agree with the comment on Nosy Crow’s blog post that suggests that, whether they’re down to nature or nurture or a mixture of the two, there are often differences between the interests of boys and girls.  However, differences do not, and should not, represent inequalities.

When I was growing up, I don’t remember there being anything like so much ‘pinkness’ in girls’ toys and books, so it’s only as an adult (and more recently, as a parent) that I’ve become increasingly aware of it.  I like pink as a colour and have many typically ‘girly’ interests, but I do seem to avoid picking up books with very pink covers and I’m not really sure why.  It’s not just because I have sons as opposed to daughters, as I buy plenty of books for myself (don’t tell my husband that 😉 ) and therefore would happily consider any book if the story and illustrations appealed.  I supposed I just feel (probably unfairly), as in the case of another commenter on the Nosy Crow blog post, that the pink books won’t contain stories that I’d like to read.

I also feel that there is still more societal pressure on boys to be boys, rather than on girls to be girls, though I fully accept my opinion on this is somewhat skewed.  For example, I once took H to the supermarket in a pale pink polo shirt and navy shorts (the top was actually from the boys’ section of a clothing store) and at the till, a lady commented on how beautiful my daughter was.  Now H, to me, is built very much like a boy and had never before been mistaken for a girl, even at the confusing newborn stage.  I smiled and thanked the lady for her compliment, but mentioned that H was actually a boy.  Her expression was incredulous: “So why have you dressed him in pink then?”  It wasn’t really the time to enter into a long debate with her, but it brought home to me how embedded this colour division now is with people.

On the other hand, C has a female friend at nursery who is probably more into Fireman Sam than he is (a difficult feat to achieve, given his own obsession means he now often refers to my husband and I as Station Officer Steele and Penny rather than Daddy and Mummy, while H is cast in the role of the hapless firefighter that is Elvis Cridlington.  C, obviously, is Sam himself and endlessly calls us all out to emergencies in various areas of Pontypandy (the dining room table is the Wholefish Cafe, the lounge represents Dilys’ shop  – you get the picture.).  No negative comment is made about his friend’s preferences, nor about the other girls he knows who love Thomas the Tank Engine.  Not that I myself feel that fire engines or trains are inherently male anyway, but they’ve long been seen as more of a ‘boy’ thing, which is why I use the example.

My mum did a lot of work as a teacher on the many different ways it is possible for us to be ‘intelligent’ other than the most traditional form (academic intelligence).  My overriding wish is for the boys to be happy and to feel able to pursue whatever life brings them that happiness by being aware of the benefits of having a range of intelligences.  At the moment this translates to me being particularly keen to help the boys develop their emotional intelligence and for them never to feel that because they are male they shouldn’t cry or should hold back on how they feel about something.  I never want them to think that their behaviour should be defined by their gender, but more that it should be based on just doing their best to be a thoughtful, considerate, confident person regardless of anything else.

As part of this, I proactively seek out a range of books to expose them to and was therefore keen to see how they’d respond to the first very pink book we’ve had in the house, which brings me back to my review.  Here is the book, in all its pink glory:

I didn’t want to spoil the boys’ enjoyment of the book by asking too many questions, but before we started I did ask C (H doesn’t really talk a whole lot yet) about what he thought of the cover.  He said he liked the little peas that edge the spine and he linked the shiny bits, but that it wasn’t his favourite ‘book picture’.  He made no comment at all about it being pink and at no point did he refer to the word ‘princess’ in the title.  One of his best (female friends) is heavily into Disney princesses and all things pink and sparkly at the moment so it’s not that he isn’t aware that some girls dig princesses.  I (maybe naively) am hoping that it’s just that he doesn’t think ONLY girls are allowed to dig princesses.

Both boys loved the endpapers (even more so once we’d read the book and they realised how all the little details tied into the story) and I can’t hide the fact that they beamed with delight when they saw a car on the title page (again, making no reference to this car’s pinkness or princessyness).  Here are the endpapers, just to share their gorgeousness with you:

As soon as I began reading the actual story, I could tell that this book was going to be a hit.  We are already big fans of Caryl Hart, but I’m ashamed to say had not really come across Sarah Warburton‘s work before, though we will be rectifying that situation sharpish.  C loved the name Lily-Rose May and repeated it quietly to himself throughout the whole story (when he wasn’t asking questions, but more on that in a moment) and H sat still and listened, which is always the seal of approval from him.  Caryl Hart’s rhythm and pace were as mouth-wateringly satisfying as always and Sarah Warburton’s illustrations were detailed, humorous and touching in equal measure (plus, there was an owl in the first spread – BONUS!).

C noticed the (very subtle) reference to one of his favourite nursery rhymes and launched into a rendition of ‘Miss Polly had a dolly’, 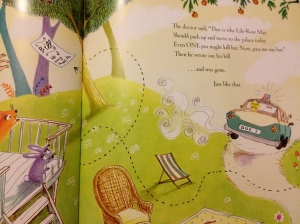 at which H merrily joined in with the actions, but once we were back on track we rattled along, with the boys loving the car picture again, though still making no comment about how much (clearly intentionally) pinker the illustrations got once Lily-Rose reached the palace:

Instead, C was just royally (BOOM BOOM!) jealous of anyone having their own massive, huge, enormous library (I’ve trained him well).

He was worried about Lily-Rose missing her dad and didn’t want to accept that she might actually be parted from him permanently (so was relieved by the eventual outcome), but then distracted himself with the rib-ticklingly hilarious proposition of eating cold cabbage stew.  We’d spent a while guessing what the palace chef might have prepared but had never entertained such a horrid possibility, so were doubly amused when we turned the page.

Both boys found the ending funny too, heartily agreeing with Lily-Rose that any dish could be improved with the addition of chocolate or cheese or maybe even both.  They were also relieved that Lily-Rose ended up back with her dad, though this did set off another round of questioning from C about her mum. 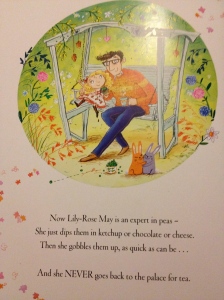 Since we received this book last week, we have read it at least twice every day (at the request of C and H – not that I’m complaining) and I would therefore have to conclude that they in no way consider it a ‘girly’ book that holds no meaning for them.  I confess that it would be more my subconscious prejudices rather than theirs which would have prevented me from picking up this book in a bookshop (although as we’re very keen on Nosy Crow stuff I probably would have picked up this particular one anyway) and I will bear this in mind next time we’re browsing.

Hats off to Caryl Hart, Sarah Warburton and Nosy Crow for a delicious book that we would recommend to anyone – boy, girl or tiny green vegetable!

P.S.  If you are also huuuuuuge fans of Nosy Crow and are feeling Christmassy, check THIS  out – they’ve turned John Lewis’ snowman advert into a book!!!!

← ‘UUGGHH!’ by Claudia Boldt
Reading at the table (and other book-related dilemmas) →